Six months ago I decided to purchase some guided meditations on Amazon.  For years I wanted to meditate but I was always intimidated by the idea.  How could I quiet my mind when my mind was always constantly racing?  Plus I would probably sit there chastising myself for not being able to clear my mind!  So I decided to start with guided meditations.  One of the meditations I downloaded was one to meet your guardian angel.

I have always fantasized about my guardian angel.  Who could it be?  A relative who passed?  Or my dad?  I imagined my guardian angel with me in times of distress but I never consistently thought of him/her.   I imagined that they would show up in life or death situations but I couldn't imagine them being around the mundane happenings in my life.  I always liked the idea of angels but I was never sure they existed.  I really wanted them to be real! Well, little did I know, I was about to find out!

When I began my guardian angel meditation, I laid down in what yogis like to call the corpse pose. 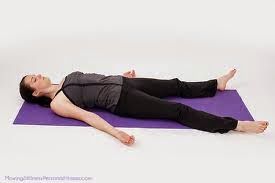 I was never fond of sitting with  my legs crossed.  My feet always fell asleep or my back would start to hurt.  So I started the meditation in the corpse pose and tried to focus on the narrator's words.  She guided me through a garden and eventually to a person.  I could imagine all this well up until this point. As I focused with my mind's eye a.k.a.  my third chakra (centered in the middle of your forehead), a form started to appear before me.  I had no expectations on who it could be.  I even imagined it would be someone I didn't even know.  I couldn't really see the person at first, like he/she was in fog.  This is often called "the veil".  When a medium tries to connect with a spiritual being it's like trying to see through a veil.

When I asked the being who it was, he answered Archangel Gabriel.  Ummm what?!  I laid there in shock.  But the meditation continued so I just followed it.  Then he started to appear more clearly to me. He had long dark brown hair and a blue gown with a roped belt and humongous wings.  I mean huge, a lot of artwork out there does not do it justice!  Later I searched the internet for a picture that resembled him.  This was the closest I could find... 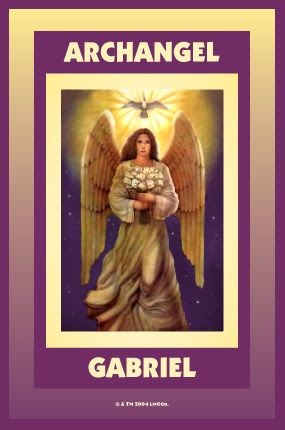 But again his wings were much bigger.  They were probably twice as high as the picture above.  He also had a twinkle in his eye and of course, was very handsome.

I was immediately comfortable with him.  I hugged him and I could see his enormous wings around me. I asked him if he had a message for me.  He said, "Keep doing what you're doing.  You're doing a good job and so many people (in the spirit world) are watching you and they are proud of you."  We didn't talk much after that.  We just enjoyed being together.  We danced and he twirled me around.  He flew into the air and flapped his ginormous wings.  He was simply awesome.

I was actually crying during the meditation and I felt my heart chaka opening.  He felt like a fatherly figure and I felt safe with him.  After the meditation I still couldn't believe it.  I didn't even know that someone's guardian angel could be an Archangel.  For those of you who don't know, Gabriel is in the Bible.  He is the angel who told Mary that she was going to give birth to Jesus!  According to Doreen Virtue's book Angels and Ascended Masters, Gabriel is the angel of parents, art and communication. Since I am a parent, an art teacher and a blogger, well that's just about perfect!

Since then I have connected with Gabriel many times.  It's quite easy for me to communicate with him, I simply have to take a few deep breaths and then feel out with my mind if he's there.  He always is.
Posted by newyawk2000 at 5:55 PM