Don't Judge a Book By Its Cover

My husband I recently went on a wonderful escorted tour of several cities in Spain.  We joined an existing tour group in Madrid.  They had been traveling a week together before we joined the group. As part of our group, there were two Catholic nuns traveling together.  We happened to sit next to them during our first dinner.

Now here is some background before I continue the story.  I grew up Catholic.  I went to five years of Catholic school.  I found Catholic school stifling to say the least: sit down, be quiet, don't talk, don't move etc.  Pure obedience was expected.  The teachers that I had in Catholic school taught a lot of fear: fear of God especially.  Oh also that we all born sinners.  I had one nun as a teacher in Catholic school, Sister Mary.  She was tall and thin and from New Hampshire.  She proudly used to tell the story that every Sunday morning in her small town of Littleton, a parade of cars would leave their driveways to head to Catholic service.  Let's just say my opinion of Catholicism is not exactly positive. 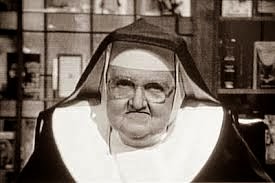 So when I met the Catholic nuns on our tour, I had all these preconceived notions on what they were like already.  But I was soon to be proved wrong.  First of all, one of the nuns, Mary Ann, was drinking wine.  I didn't know nuns drank wine!  When she asked me what I did, I told her about my children but I also told her about my Reiki training, interest in crystal healing and the recent moon celebration I attended.  And to my shock she thought all of that was wonderful!

So I get this lesson once in a while, and it has not been my first time: don't judge a book by its cover.  I found Mary Ann refreshing and it gave me hope that even Catholic nuns could be modern and open minded!
Posted by newyawk2000 at 8:03 AM